During the after-flood-day, all of the Wwoofers and volunteers worked on the farm for the whole day and we accomplished a lot! After harvesting a big bunch of potatoes, we collected all the grass that had just been cut and make a large pile because we needed it for the compost. Afterwards, everyone went on the meadow to collected sheep poo, because this is another essential part of the compost. At the end of the afternoon, we were finally able to layer the compost that consists of many different layers and it was very interesting and impressive to learn about such an import aspect of farming. This kind of compost is supposed to be ready after 21 days when it is turned every third to fourth day. We celebrated the finishing of the compost with a beer and a good meal.

On Tuesday, the floor of the cinema had finally dried and so the team moved all the furniture back in. We re-opened the cinema with the extended edition of the movie “The Lord of the Rings – The Fellowship of the Ring” while enjoying a nice fire and mint tea – prepared with herbs of the garden!

The group of people working here is so multicultural: Swiss, American, Indian, Australian, Kiwi and German. This is why we celebrated a vegetarian/ vegan American Thanksgiving on Thursday night with many people who all brought something to eat – we had a potluck! Fortunately, I had my day off on that event, so a friend and I were able to prepare lots of food: pumpkin-sweet potato-gnocchi with sage pesto, corn muffins and hummus-soup. And that wasn’t even everything that was served: In addition, we ate garlic-rosemary-bread, nutbread, salad with caramelized cabbage and yoghurt-sauce, vegetable-strada, vegetable-frittata, bean-stew with fresh thyme, dark-miso balls, banana cake with coconut cream, cheesecake and pumpkin-pie! 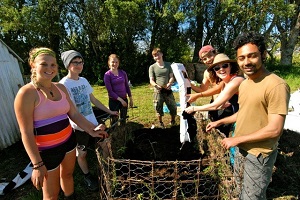