I’ve spent three weeks now at Rongo’s and I had some busy but also some quiet days. The first week we did not have that many guests, so there wasn’t much to do in the hostel. Regarding farmwork I did things I’ve never done before in my life and I had lots of fun. One day, I turned the compost that was built two weeks before and it was impressive to see that in this amount of time all ingredients had turned to soil already! We also weeded in the Backpacker’s entrance area and reorganized a stone-bed which was partly exhausting but definitely worth the effort as every guest sees this area of the hostel. On Friday, we dropped off a guest who wanted to start the Heaphy Track and I was stunned by the amazing view of the beach at Kohaihai. During my second week, three new Woofers arrived, that I introduced in what has to be done in the hostel. It was very nice to have them there to cook dinner together (we used vegetables grown on our farm like potatoes and parsnips).

In week three, three more Woofers arrived and it has started to get busier at the Backpacker’s – also with guests! In this way, we can share the work that has to be done and we finished everything even faster. It allows us to go on trips, so I want to the Oparara Basin with four other people on Thursday. The trip was wonderful: During the 45-minutes car drive you go through the National Park and can have a look at all the huge trees and green plants. There is a round-walk during which you get access to the first arch and another short walk to the second arch. It was impressive to see what nature has built and how diverse it is.

There were immense rainfalls in the night from Friday to Saturday resulting into a small flood in Karamea. Consequently, we had to remove all the furniture out of the cinema, roll up the carpets, and stack the chairs on benches. In this way, we saved the chairs and electricity and afterwards just waited for the flood to go back. Karamea was woken up with sunshine on Sunday – the flood was gone! 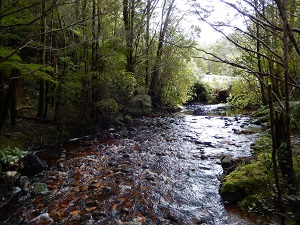